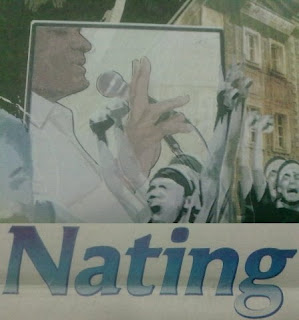 Experience taught us to be more matured. Experience has also taught us never to compromise when it comes to what we have the right to demand from those in power.

Of course there would be some members of the society who have chosen to have an entirely different set of thinking. They claim that whatever my friends and I are hoping for would never give us anything back in return.

Why don’t you just sit back and listen to this story. Then you would be able to come to your own conclusion.

That was the opinion among some of the residents. Therefore, that was exactly what they requested from some of the election candidates who made house-to-house visits.

All the requests were fulfilled in no time by some of the candidates who were actually getting strong support from a certain central body. If not, it is absolutely impossible to fulfill all those requests in such a short time – in only a week during the election campaigning period.

But truth be told, the majority of people in Siru Kambam still think rationally. We could never be won over easily by persuasion and sweet talk. As I mention earlier, we know what we should and what we could expect.

“Is that all what you are expecting from a Wakil Rakyat who would be representing your constituency in the House of Commons, the Dewan Rakyat?”

The voice of the candidate who was campaigning for the third time in our village was loud and clear. Many were gathered around the small stage to listen to his speech. That was not a surprise since this person is the blue-eyed boy selected by the leaders at the national level.

“Only paved roads? Which would certainly be in a very bad condition and filled with potholes in just a few weeks!”

He looked at and scrutinized almost each and everyone present. There was a slight frown on his forehead. Perhaps he was aware to the fact that most of the people who were present to listen to his speech were not from Siru Kambam. They were mostly outsiders who have come for a few reasons.

First, for the free food and drinks. Second, to enjoy themselves listening to the political speeches delivered by the election candidates.

“Or simply an additional building for the school which would surely collapse anytime after the by-election result is announced?”

Those present were listening tentatively. Some were looking at each other – as if looking for the individuals who put forward the list of such requests to some of the election candidates.

The candidate who was speaking (read: campaigning) on the stage gave a pause to provide a dramatic effect to his speech; exactly the way he was trained by his allies since the nomination day.

Then, very slowly, he took out a copy of the poster which was already being distributed throughout Siru Kambam since the campaigning began. The poster clearly displayed what was being promised by the candidate if he were to be elected as Wakil Rakyat to represent the constituency.

“This is what you need. This is what we promise. This is what we will deliver to you. So, I urge each and everyone of you to think smart and rationally. There are some candidates who are trying to fool you by promising you – even giving you – paved roads, school buildings and financial support to start a business.”

Some among the audience were nodding. Maybe they were agreeing to what the speaker alias candidate was saying. Or perhaps as an indication of admitting that they have indeed received such aid and settlement from the other candidates.

“If all of you are smart enough to vote for me in this by-election, I shall do as I have promised. I will not repeat the mistakes made by the previous Wakil Rakyat,” he added in a charming voice.

This last statement brought back the memory of the Wakil Rakyat who was stomped to death by an elephant a few weeks back. I can safely say that most of the villagers did not miss the previous Wakil Rakyat. It is a known fact that he hardly came to meet the people in his constituency since the general election.

“Forget about the person who failed to serve the people in that area.”

That was more or less what the national president of the Indian Political Association (Pertubuhan Politik India, PPI) reportedly said at a press conference.

“This time around, PPI shall nominate a people-oriented candidate. A candidate who doesn’t have a house. This candidate would very often visit people’s house. A candidate who at the moment has no permanent job. His sole purpose in life would be to be the voice of the people in his constituency. And of course, a candidate who is hated by neither human nor elephants.”

Thus spoke the PPI president in front of a huge crowd in Siru Kambam recently.

Everything else aside, this by-election is a dream-come-true for the people, the Rakyat. We have to make full use of this golden opportunity to gain only the very best from the Wakil Rakyat whom we shall elect democratically.

It is not a question whether the candidate is from the ruling party or from the opposition or an independent candidate. The only thing which matters is that we shall vote for a candidate who could – without the slightest doubt – deliver what has been promised; deliver what we dream of: Nating.