Hanuman: A Self Portrait – Part 1 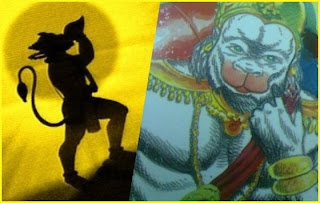 Hanuman. I am the great white monkey. I am the one with the power to become as huge as the universe and as small as the dust.


I am the white monkey with the gift from God to appear in dreams of those whom I love. I am Hanuman, the green eyed monkey which could fly across the sky and breathe underwater.


Praise the Great Lord for it is He who has granted this small monkey with such extraordinary gifts.


I am Hanuman whose white fur represents the pureness of the heart; the green colour of the eyes, a symbol of devotion and love.


I am the one sent by Brahma to assist Rama to kill Ravana. Yes, I am the one referred to as Rama’s most loyal devotee. The great Rama, the worrior, the most talented; the slayer of Ravana.


That is something everyone knows. But I am not merely his most loyal devotee. I am also .... No! I am not supposed to reveal the truth since Rama himself never acknowledged it.

On this Maha Purita Mountain, Rama has bulit a seven-layer palace with seventeen floors. But he did not rule very long. Just a year ago, when I was twenty nine, Rama and his wife, Sita, left all of us. The responsibility of ruling the Kingdom of Indus was passed over to me by Rama in his will.


Why me? Why not Tilewi, his son who wedded Princess Indera Kesuma, the daughter of Indrajit?


What a stupid question I’m asking myself! Tilewi already has a kingdom to rule.


After Ravana’s infamous death, Rama worked very hard to unite the Aryan and the Dravidian people. Once their leader was dead, the remaining Aryan race surrendered themselves to Rama and accepted his leadership.

Their decision made Rama’s dream materialize sooner than expected. The king himself asked his son, Tilewi to marry Indrajit’s daughter, Princess Indera Kesuma.


Actually, it was also done to honour Indrajit’s final wish. I still remember the incident. I could still hear Indrajit’s voice ringing in my ears.


“Truth must prevail,” he struggled to say just moments before his death in the battleground. “I have fulfilled my responsibility. I have fought in this battle as a loyal son to Ravana. I have proven to the world that no matter how great a person is, victory shall always belong to those who fight for the truth.”


Indrajit looked deep into my eyes as he uttered each and every word. I tenderly touched his wounded chest as he struggled to speak.

“I do not want the future generation of the Aryan race to remain at fault. Please, Hanuman, get my daughter married to Rama’s son. I want my generations to come to feel proud for being on the right side. Let the Aryan and the Dravidian people unite. Please get my daughter, Princess Indera Kesuma married to Tilewi, the son of Rama. Make him the ruler of the Kingdom of Heaven.”

(Translation © Uthaya Sankar SB 2011. The above extract from the novel Hanuman: Potret Diri was translated by the author on 13 November 2011. The original Part One of this story in Bahasa Malaysia was published in the author’s blog on 8 November 2011. Please CLICK HERE for more articles in English. Get a limited edition, hardcover copy of Hanuman: Suara Hati - CLICK HERE for details in Bahasa Malaysia.)
Catatan Minda Uthaya Sankar SB pada 7:00:00 am
Email ThisBlogThis!Share to TwitterShare to FacebookShare to Pinterest
Newer Post Older Post Home