DBP Turning the Malaysian Family Concept Into a Joke! 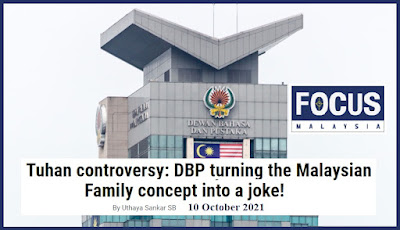 WHILE Prime Minister Datuk Seri Ismail Sabri Yaakob has been asking Malaysians, since his inaugural speech on 22 Aug 2021, to set aside their differences and come together to lift the country to greater heights and help realise the Shared Prosperity Vision 2030, he seems oblivious that a Government agency is clearly going against the Malaysian Family spirit.

Six months ago, I asked, “Apart from Allah, why is the word ‘Tuhan’ exclusive for Muslims too?” (Focus Malaysia, 17 April 2021). This issue was highlighted when I noticed a “silent” movement going on, undermining the religious rights of non-Muslims in Malaysia.

Ismail stressed that the Malaysian Family (Keluarga Malaysia) is an inclusive concept that cuts across religious, ethnic, and racial boundaries and encourages Malaysians to come together as a unified family.

What I noticed in Meredah Kabus, an anthology published by Dewan Bahasa dan Pustaka (DBP), the Government’s language and literature body, was doing totally the opposite.

In all the short stories in the anthology, whenever a non-Muslim author wrote “Tuhan” (God), it was changed to “tuhan” (god) without their consent. More surprisingly, “Tuhan” was retained when the author is a Muslim.

After this unfair practice was highlighted, DBP initially claimed “it was oblivious on the ‘Tuhan’ controversy” and that “DBP made no such ruling to differentiate between ‘Tuhan’ and ‘tuhan’” (Focus Malaysia, 19 April 2021).

But the very next day, its director general Datuk Abang Salehuddin Abg Shokeran in an official statement defended its decision to make a distinction between the words “Tuhan” for monotheistic religion and “tuhan” for polytheistic faiths.

DBP made it clear that “Tuhan” can only be used to refer to Allah. The language and literature agency has slowly but surely become a fascist organisation that goes all out to undermine non-Muslims in general.

Many non-Muslim individuals and NGOs were furious after reading DBP’s nonsensical explanation – see here. People started asking about “Tuhan” in the Negaraku (national anthem) and the very first principle in Rukun Negara; “Kepercayaan kepada Tuhan”. But everything fell on deaf ears; clearly against the Malaysian Family spirit which our prime minister is eagerly talking about.

On 23 April 2021, I sent an e-mail seeking a meeting with Abang Salehuddin to discuss the matter. I was told that DBP would need some time to get back to me since it was Ramadan (fasting month).

And that was the end of it. The media too lost interest to follow up after a month of silence from DBP. Perhaps the authorities in DBP assumed that everything would be forgotten in due time.

On my side, I have been writing for DBP since 1992. I also encourage others to submit their works to magazines published by DBP. On 21 May 2021, I officially decided to boycott this fascist and racist organisation.

Since Ismail is busy promoting the Malaysian Family concept and also asking every ministry and agency to identify suitable products to be adopted as part of the effort to meet the people’s need, I could not help but wonder how DBP could ever fit into this.

Obviously, the prime minister and education minister are in the dark about the “Tuhan” and “tuhan” fiasco. Nevertheless, the recent racist and fascist policy practiced by DBP would slowly but surely destroy Malaysian Family to the core.

Since the national language and literature is important for nation-building from a very young age, DBP at present is clearly nothing more than a subversive movement to create disunity among the Muslims and non-Muslims in this country.

Ismail is introducing the Key Happiness Outcome (KHO) to complement the Key Performance Index (KPI) as an evaluation tool to measure each Government agency’s effectiveness under the Malaysian Family policy.

No such KPI and KHO is needed for DBP as it is already obvious that this particular organisation is nowhere close to the Malaysian Family spirit in anything they do at present.

As long as DBP stands by its bigoted decision that “Tuhan” can only be used to refer to Allah, Ismail can forget about getting an ounce of contribution from this language and literature agency towards the success of his policy.

While the prime minister wants to see a united Malaysia, DBP seems to be working very hard (except in Ramadan, perhaps) in making sure non-Muslims and non-Malays in general would never, ever be part of the family. They are to be forever treated as outsiders and second-class citizens. DBP clearly knows that Bahasa Malaysia is an effective tool to degrade non-Muslims.

Ismail has stressed that despite our diversity in religion, race, and ethnicity, we are all part of the Malaysian Family; we complement and need each other as different parts of a single body. Perhaps for DBP, non-Muslims are seen only as the anus.

The 12th Malaysian Plan has been formulated with the objective of “A Prosperous, Inclusive Sustainable Malaysia” and also formulated based on the “bottom-up” approach where the voices of all the stakeholders are given due consideration.

Perhaps the prime minister is unaware that DBP is subversively working totally against the Malaysian Family concept by making sure non-Muslims are denied the right to even write the word “Tuhan” using a capital T. 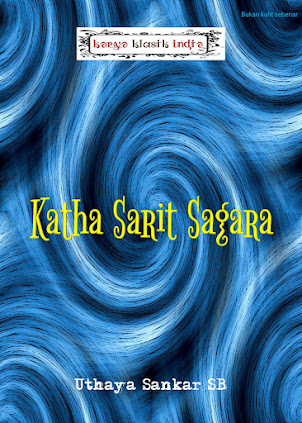 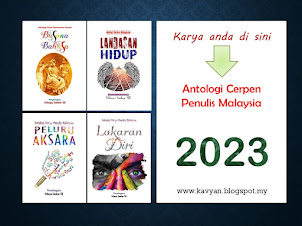