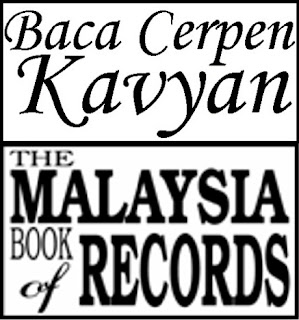 
If one flips through Bahasa Malaysia magazines and newspapers in Malaysia, one can almost be sure to see a Kavyan Writer’s name printed on it. The same would apply if one searched the internet for information about Malaysian writers. Chances are, the same 14 letter name would appear too often.


‘Uthaya Sankar SB’ – that’s 14 letters, right? I have been a regular contributor to various magazines and newspapers since 1992. I am also a columnist for Free Malaysia Today and The Malaysian Insider news portals. But am I monopolizing and trying to be the one and only Kavyan Writer?


Truth be told, I have managed – and, alas, also failed – to groom more Kavyan Writers. Kavyan organizes events almost every week for the benefit of members and non-members. Creative writing workshops are conducted every now and then. I edit and channel works of others to editors. Thus, I can openly say that I am in no way monopolizing.


I have been the founder president of Kumpulan Sasterawan Kavyan (Kavyan Writers’ Group) since August 1999. Kavyan set a record in The Malaysia Book of Records in 2003 through Baca Cerpen Kavyan (Kavyan Short Story Reading), a non-stop Bahasa Malaysia short story recital for 96 hours and 32 minutes. Kavyan was also awarded Anugerah Budayawan Selangor (Selangor Cultural Activist Award) in 2005 and a certificate of appreciation from the National Library in 2009 for promoting reading culture in the multicultural society.


Details of Kavyan background and activities are available at www.kavyan.blogspot.com, mostly in Bahasa Malaysia.

In the old days we didn’t get to “see” a real Indian character portrayed in Bahasa Malaysia stories. More often than not, characters which bear an Indian name (Muthu, Ramasamy etc) are very much Malay in character. The names can be changed (to, say, Mahmud and Ahmad or Ah Choong and Ah Beng) and yet the story would not lack anything.


Perhaps this is another point where Kavyan Writers excel. Kavyan Writers have a good command of Bahasa Malaysia, while also competent in English and in at least one Indian language (Tamil, Malayalam, Telegu etc). Kavyan Writers also seem to know and understand the culture and beliefs of other races. The ability to read Tamil and English opens a wide path to Indian culture. All these provide unlimited material for Kavyan Writings.


On a Personal Note


“How can you be so fluent in Bahasa Malaysia when you’re not a Malay?”


I am indeed very glad that I don’t get such questions anymore from reporters, workshop participants and readers. It took me years to convince others that there’s nothing amazing to see/hear a Malaysian speaking fluent Bahasa Malaysia.