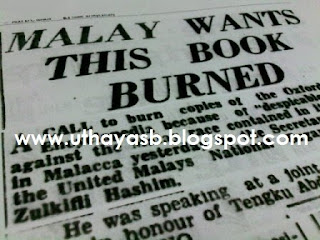 A call to burn copies of the Oxford Junior Encyclopedia because of “despicable remarks” against the Malay race contained in it, was made in Malacca yesterday by the Secretary-General of the United Malays National Organisation, Inche Zulkifli Hashim.
..

He was speaking at a joint UMNO-MCA tea party in honour of Tengku Abdul Rahman, President of UMNO.

Sir Cheng-lock Tan, President of the M.C.A also spoke at the meeting.

Inche Zulkifli said that not only every UMNO member but every true Malay should resent the remarks made in the latest copy of the encyclopedia about the Malays.

The 12-volume encyclopedia, printed by the Oxford University Press, is on sale in Singapore at $18 a volume.

The chapter on the Malays is contained in volume one, which deals with Mankind.

References are made to the “backwardness and indolence” of the Malays.

Dealing with the Malayan Union, the encyclopedia says:

“At the beginning of 1946 a new constitution—a United States of malaya—was offered to Malaya; but this has met with considerable opposition.

“It is naturally difficult for a people so backward, indolent, and accustomed to the autocratic rule of their sultans to learn the meaning of a more democratic form of government.”

The reference which the Malays will most resent calls them “a dishonest and a lazy people with considerable charm.”

Although a long list of contributors has been published, there is no indication who the author of the section on Malaya could be.

Not a single well known Malayan name appears in the list.