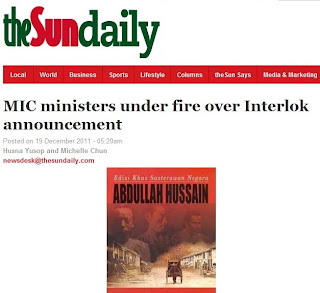 PETALING JAYA (Dec 18, 2011): Two MIC ministers who announced that the cabinet had decided to withdraw the controversial novel Interlok from the school syllabus from next year came under fire from Deputy Education Minister Dr Mohd Puad Zarkashi today.

Puad said the two ministers, who had nothing to do with the Education Ministry, had jumped the gun by making the annoucement.

According to Puad, they should have waited for Deputy Prime Minister and Education Minister Tan Sri Muhyiddin Yassin to make the announcement. Muhyiddin is overseas and will be back only on Dec 25.

“I only heard about the the decision on Friday night when watching the news on television. I cannot confirm or deny it, as I was not at the cabinet meeting,” Puad said.

He said MIC president Datuk G. Palanivel and his deputy Datuk Seri Dr S. Subramaniam should not have preempted the minister in charge of education.

“Their action could have created a misunderstanding. They should not have done it. It is as if they were not giving a chance to the education minister to explain further,” Puad told theSun today.

On Friday, Palanivel, a minister in the Prime Minister’s Department, and Subramaniam, the human resources minister, announced separately that the cabinet had decided to withdraw the book from the school syllabus. [READ HERE]

When contacted by theSun, Palanivel defended his decision to make the announcement, saying the withdrawal is not a sudden decision.

“I spoke of this to National Interlok Action Team chairman Datuk Thasleem Mohamed Ibrahim on May 12 when we both visited former MIC deputy president S. Subramaniam when he was sick, and I told him Interlok would not be used in 2012,” Palanivel said.

“The amended version, which we agreed upon, was only used because it was already introduced to the schools this year. At the cabinet, we merely reminded the deputy prime minister to come out with a statement saying the book would not be used from next year onwards,” he said yesterday.

Meanwhile, a ministry source said the education director-general is calling for a meeting today in relation to the decision on the novel which has been accepted, with amendments, as the literature component of the Bahasa Malaysia subject for Form Five.

“We can expect an announcement to be made Monday,” the source told theSun.

“We will only know whether the withdrawal of Interlok is true and valid when Muhyiddin makes a statement, which is supposed to be in the near future, so we are waiting for that,” Uthaya told theSun when contacted.

“We are concerned as to whether this could become another flip-flop issue, as the MIC president made a statement last week saying the party was happy with the amendments to the book and now this sudden claim of withdrawal,” he said.

Uthaya also expressed concern that the decision, if true, could be a political move solely aimed at winning votes during the impending 13th general election. [READ MORE]

Dewan Bahasa dan Pustaka director-general Datuk Termuzi Abdul Aziz said when contacted that he has not been informed of the government decision on Interlok.

“I only knew about this when the news broke out on television, radio and in the newspapers. The dissatisfied parties had already agreed to the amended version, which we have printed and distributed to schools already for next year. I am now waiting for a directive from Muhyiddin,” he told theSun.

The Interlok has been a textbook for the literature component of the Bahasa Malaysia subject for Form Five this year in Selangor, Kuala Lumpur, Negri Sembilan and Putrajaya.

The novel, written by national laureate Abdullah Hussain, chronicles the lives of three persons – a Malay, a Chinese and an Indian.

It is deemed controversial because of certain phrases and words are considered racially insensitive by the Indian community. Some amendments were made to it earlier this year.